Siri, how does one define artificial intelligence? Siri: Artificial intelligence is the ability for computers to access like speech recognition, learning, and problem solving, but also how machine learning can one day anticipate the physical as well as emotional needs of people. 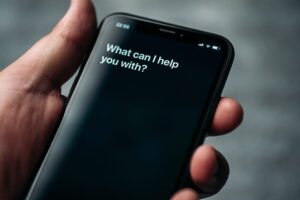 In equal measure, our demand for added AI into the work spaces of tomorrow are increasing at an exponential rate. Furthermore, the nuanced idea of AI that handles emotional learning is an exciting new concept. Siri is a perfect example of what scientists in the field of AI dubb “recall protocol assistant,” meaning while “she,” can formulate exact answers to math problems and single input command answers, Siri is however unable to answer questions such as: what is the meaning of life? What are just virtues? In this sense, machine learning is in an infant state. Just as an infant cannot anticipate or understand long term sequential needs such as emotional development, the same inability is also true of our current AI. Contrary to popular belief, Siri is not truly a new kind of AI. In fact, Siri is just a modern derivative from an earlier kind made by John McCarthy. SNARC AI which was developed in 1956. Forbes states that Siri, however is expected to grow in market growth by 48% in the coming years in regarding its use within the educational industry over the next several years. 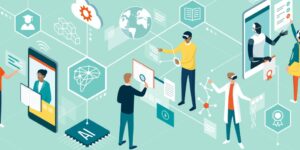 While most people just recognize AI most often from their phones, or at Universities, there are many other very important types that are going into things such as: therapy, kinesiology, metallurgy, child care, distribution in retail, etc. In short, the applications and implications for the onward advance of AI taking hold in so many fields is seemingly boundless. In fact, most students a day tend to engage the most on a day to day basis via Siri on their phones rather than face to face with their peers and family. Furthermore, the increased focus on mass online courses to better facilitate educational needs for new students means that the demand for AI to maintain such mass online classes such as MOOCs in education is on a precipitous rise. Given such changes, it is only natural to ask: will AI also make such similar advances into K-12 system where one day all classes may one day all be taught by a sophisticated AI? From what has been shown it certainly seems more and more likely as the years go by.

Moreover, being able to understand and appreciate the advances of AI is vital given the fact that many parents in the coming years will find it exceedingly difficult to find the right kind of educators that accommodate their children’s exact learning needs. Teachers of the future, given the rise of neuro-diversity will have to take into account tailoring each lesson plan to the individualized needs of the students, especially students with special needs such as those with autism, etc. Hence, it is easy to see the immediate benefit for schools to perhaps one day pick up where the military left off in successfully implementing a much more robust AI : CALO(Cognitive Assistant that learns and organizes). This entity would have the capability to quickly adjust to all learner needs and fully raise the overall effectiveness of all classrooms of tomorrow by tailoring lessons to match individual needs. At least, that is how it would theoretically work given the best application. In effect, it will be the final realization of the end game laid out in the “No child left behind,” educational bills that were meant to address the sharp inequalities of educational outcomes in classrooms across the country.

Furthermore, mass use of CALO would be able to rapidly account for systemic issues such as long term volatility in things such as the housing market. Hence, theoretically, it would be able to prevent the issue of dramatic over emotional reactions which generated the conditions for the housing crash in the market in 2008. Other key considerations for CALO are the following: being able to quickly tend to therapeutic needs of employees, adjusting military expenditures in a logical way, providing an objective map for educational boards to resolve issues without getting bogged down in politics. In addition, we must now consider how it would change the lay of the land when it comes to Maslow’s Hierarchy of needs. Abraham Maslow created this hierarchy of psychological needs to represent the levels at which people can advance beyond their basic needs and wants in order to achieve higher goals. Obviously, if an individual is at the exact bottom of the pyramid they are unable to see beyond their next meal or next bath etc. Hence, you could say that Maslow’s hierarchy is just simply a needs assessment spectrum, which it is. Imagine how different it would look though if you were to have CALO embraced across the world and issues of scarcity cease to be. Then, even the opportunity for people to be given a more rich education that opens up a wider world perspective can then take root.

While Artificial intelligence in education has many obvious upsides, there are nonetheless key downsides to consider. After all, if we want to implement the best possible educational structures for teaching social emotional learning curriculum, we need to consider all the dimensions of the tools that help make that a reality. First, the clear downside is that AI is often costly to implement, in some cases nigh impossible if you were to try to implement it into schools in third world nations for instance. Another downside: CALO only works best on students who have had previous emotional development. It has been shown to be nigh impossible to teach emotional engagement to children who are still in their nascent narcissistic state via AI. Lastly, the most challenging downside would be regarding sentiments of scorn several communities engender towards the use of AI in schools as “job killers,” and as a “reckless,” act.

Despite all the issues. AI continues to be a front and center consideration for educational curriculum of the future. Over the next several years, it is projected that Google and others will have put in over 40 billion into research and development of new AI tracks. In addition, at the very least AI will prove to be an effective vessel to provide supplemental education alongside teachers lesson plans in the years to come. Another key advantage is that unlike human substitute teachers, the AI would be able to quickly adapt to the situation and relay more effectively the most accurate assessments of grades and communications with the students and parents, etc. Recently, a survey conducted by Oracle and Future Workplace show increased performance when AI had been used in the workplace. This is evidenced in what was found: 49% of employees had better work experiences with technology use. Employers when polled on it had a 60% approval of future prospects of increased AI use in the workplace.

In addition, powerful AI can not only stabilize social emotional learning of the future, but it would also generate express lanes in which learners quickly pick up on coding languages. Popular and most used coding languages such as: Python, Java, C##, NoSQL, C are the fundamental building blocks used for creating advanced algorithms which make our digital age possible. In addition, cloud computing skills are in exceeding demand. Proper implementations of cloud based technologies saves companies billions as well as streamlines workplace efficiency by 52%. Furthermore, it could provide an immediate window into a world that would otherwise not be broached by the digitally illiterate. Furthermore, essential classes of the future regarding intellectual property law and ethics of information technology are on the rise. Given recent cases of things such as the silk road scandals and other bitcoin markets that then become dark markets, we only stand to benefit. Furthermore, such illumination is not only prudent, but ultimately necessary.

With all this said, it should now be apparent that AI can be a powerful agent to utilize in order to better the social emotional learning that is to come. Embracing the benefits along with all the challenges AI presents not only bodes well for education, but for society in general. Lastly, according to CBInsights AI startups received over 7 billion over the years in funding in just early 2019 alone. Equally as compelling; traditional universities and formal teaching has been steadily losing popularity. With that being the case, it means the market is becoming more wide open to better alternative mediums for providing quality social emotional learning whilst bettering the whole of academic pursuits. AI can ultimately tailor and individualize those pursuits in advancing the whole educational trajectory of the human race twice over or even better over just the next 5-15 years. This is what Ray Kurzweil refers to as a universal law of accelerating returns in technological advances.